Transferrin is an iron binding protein found in blood plasma that is critical to cell health. Transferrin supplies iron to cells naturally in the body and as a supplement in cell culture media.

Human serum transferrin, a bilobal ~75 kD glycoprotein that has the ability to reversibly bind Fe3+ with nanomolar affinity, represents one of the major vehicles for iron delivery to cells both in vivo and in vitro3. Produced in the liver, transferrin is found in the blood plasma as a heterogeneous population at approximately 2.5 mg/mL consisting of diferric (holo or iron-saturated), monoferric N-lobe, monoferric C-lobe (partially iron saturated) or apo transferrin4.

At pH 7.4, the pH of human serum, holo transferrin has the highest affinity for the cell surface transferrin receptor (TFR) followed by the two monoferric forms4. One of these three iron-bound forms of transferrin will bind the TFR and be internalized via clathrin-dependent endocytosis5.  Subsequent acidification of the endosome via ATP-dependent H+ pumps will trigger the receptor-stimulated release of iron from transferrin where the reduction of Fe3+ to Fe2+ ensues4.

The now iron-free transferrin/TFR complex is subsequently redirected back to the cell surface where the weak association for the TFR at serum pH will trigger the dissociation of apo transferrin where apo transferrin can bind additional Fe3+ 6 (Figure 1). This process occurs quite rapidly so that each transferrin molecule delivers several payloads of iron per hour4. Although the fully saturated diferric transferrin has the highest affinity for the TFR (Kd ~4 nM), the fact that monoferric forms also are capable of high affinity bonds with the TFR (Kd ~36 and 32 nM for the FeNhTF and FeChTF, respectively) would indicate that partially iron saturated transferrin would be functional in cell culture4.

Given the central role of iron uptake in cell health, the inclusion of transferrin is absolutely critical in serum-free cell culture media to ensure adequate cell proliferation and function ex vivo for most cell types. The natural abundance of transferrin in human serum combined with relatively straightforward purification has enabled the isolation and utilization of serum-derived transferrin for in vitro cell culture applications for years. 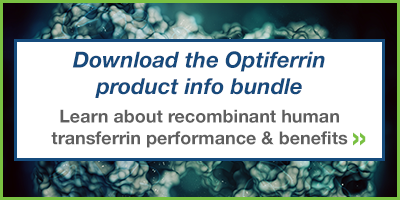 However, given the inherent reliability issues and potential safety concerns of using biologically-sourced proteins, there have been extensive efforts to generate recombinant versions of human serum transferrin. Initial attempts using prokaryotic and simple eukaryotic expression systems were met with only limited success7,8. Low expression and/or expression of nonfunctional protein prompted the investigation of using more complex eukaryotic expression systems such as Baby Hamster Kidney (BHK)9,10.

We have successfully expressed human serum transferrin at high levels11. Interrogation of the biochemical and functional aspects of this recombinant transferrin indicated acceptable characteristics of the recombinant protein11.

We found that this recombinant transferrin, called Optiferrin, possessed the correct sequence and size and was able to compete with human serum-derived transferrin for TFR binding sites on both CCL-2 and Caco-2 cells11,12. As a result, cell proliferation was found to be identical in a hybridoma line across a range of relevant concentrations (Figure 2). Figure 2. Equivalence of Optiferrin in Inducing Hybridoma Cell Growth.
Sp2/0 hybridoma (ATCC) were maintained in DMEM/F12 with GlutaMax + 10 mM HEPES and 10% FBS. To determine if bioactivity of either serum-derived transferrin, cells were washed extensively with basal DMEM/F12 and then seeded in the same base supplemented with 1 g/L rhalbumin, 10 mg/L rhinsulin, 6.7 µg/L selenite, and 2 mg/L ethanolamine with or without 0.1-10 mg/L serum derived or rhtransferrin (Optiferrin). Cells were incubated for 72 hrs and viable cell counts were subsequently determined. Optiferrin exhibited equivalent activity in inducing hybridoma cell growth to native human transferrin.

Given the identical structure and function of the recombinant Optiferrin to serum-derived transferrin, it would be expected that Optiferrin would have utility across multiple cell systems and different serum-free media formulations. Indeed, to date we have confirmed the activity of Optiferrin in human mesenchymal stem cells from multiple tissues, neural stem cells, induced pluripotent stem cells, primary T cells, fibroblasts from multiple tissues, keratinocytes, VERO cells, hematopoietic stem cells, and hybridoma. Further, the adoption of Optiferrin in industry has been steadily increasing since this recombinant protein debuted in 2012. 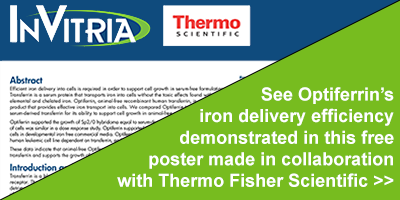 The elucidation of recombinant DNA technology has given the scientific community great insights into the intricate mechanisms of protein expression. Yet, even after a genetic sequence is obtained and expressed within a recombinant host, there is still the challenge of demonstrating equivalence to the native protein. In the case of transferrin, the nonmammalian-based expression platform was able to produce a full length, fully functional, human transferrin protein that demonstrated equivalence to the serum-derived protein. 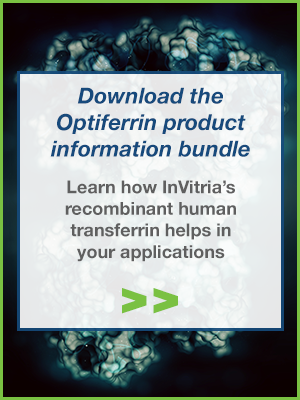